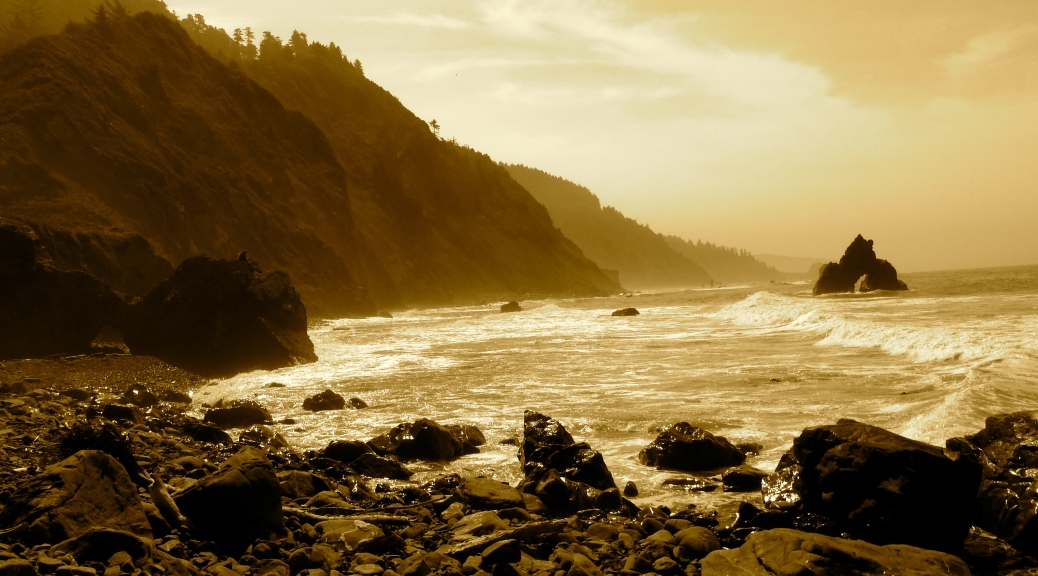 Who knew California was soooo incredibly long!? But what a lovely surprise to me. After Cobbler Hill we still had miles and miles of craggy coastline to enjoy. Driving on after our fabulous stay, we stopped to check out the little town of Mendocino and grab some fixings to cook up for dinner. They sure do have some fresh and delicious food in that neck of the woods. I could have wandered around that tiny provisions store for hours.  Northern California (true Northern California, not NorCal) is full of quaint sleepy little towns that hug the coast. Each town seems to center around the PCH for a few blocks or so and contain only a handful of the most charming shops.

Some WINDY roads though, made me a little sick to my stomach. My motion sickness has gotten worse as I grew up. So uncool. I remember loving those amusement part rides as a kid… now the mere thought of reading my iphone for directions on the PCH is enough to make me queasy.

We stopped at Mystery Hill (World Famous, obviously) to do the road trip thing. I love me some “world’s largest/tallest/strangest” stuff! 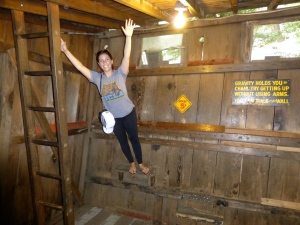 Further on we saw a handful of wild elk grazing in the blackberry bushes. They are beautiful majestic creatures. Santa might consider subbing reindeer for elk at the helm of his sleigh 🙂 It helped that the sun hit the moist air in just the right light as if to spotlight the animals in a magical spotlight. I was jealous of the elk, so indulged in some fresh blackberries myself. SO juicy. MMM.

Mill Creek Campground served as home for us in Del Norte for a night. The camp was moist and lush. Small campsites, fairly crowded, but a nice spot for sure. We cooked bacon cheeseburgers for dinner, and finished the wine we had opened in Mendocino. I have to mention one of the most useful items we brought along with us on the trip: the camo boat chairs. OH MY GOD, I love these things. We bought these at a WalMart in Napa while there for a music festival and desperate for some seating in the hot hot sun. They were all out of traditional camping chairs (apparently we were the last people to have this thought), but what a fortuitous mistake, because the boat chairs are the best thing since toast (toast is so good). We’ve ended up bringing these to the beach, concerts, lake sides, and they make picnic tables infinitely more comfortable. And to think we almost left them behind! But I digress… the best part of Del Norte, BY FAR, was the epicly beautiful hike we did the next day.

After making some oatmeal for breakfast we faced the dreaded daily task of packing up the car once again. Sometimes we feel like its getting easier, sometimes it seems like our stuff fits worse than the day before. This prompted our decision that wherever we wound up next would be our home for two nights. We just couldn’t bear the thought of waking up and folding up our wet tent and stuffing all our things into the car one more morning. The packing tetris game got old fast. More on that later (this post will conclude CA… it’s on to Oregon next!).

In order to get in some much-needed exercise, we drove south about 4 miles to Damnation Creek Trail, located at mile marker 16. We parked on the street, took our daypack and began the 4.2 mile round trip, in-and-out, 1000 feet drop hike to the shore. The trail books and signposts warned of a steep, strenuous trail, but it was not bad at all, and most definitely worth the trip. The path down switchbacks through a dense, moist redwood forest, and when you arrive at the end, you stumble out into the most stunning shoreline view. There is a little rocky beach where you can sit for a while and watch the waves crash into the rugged coastline.

Back at the car we fixed some PB&J sammies, and then hit the road again in search of a campsite that would work as home base for the next two nights. Onward and Oregon bound!