Jackson Hole holds a special place in the hearts of skiers and boarders worldwide.  It boasts more than 4,000 vertical feet and arguably the best advanced terrain in the country, if not the world.  I spent a week skiing Jackson in 2002 and hope to return in the winter soon, and I am eager to visit Chamonix in France which is another contender.  While most famous as a winter destination, Jackson’s scenery, outdoor activities and proximity to Yellowstone make it a wonderful summer spot.

September 7 (Saturday, cont’d) – We exited Yellowstone at the South entrance and continued down to Colter Bay Campground, finding our first clean view of the spectacular Teton Mountains on the way.  We also passed a sign indicating the 45º mark, i.e. the halfway point between the equator and the North Pole.  For those unfamiliar with this area, perhaps a brief orientation would be helpful.  Jackson, Wyoming is a town that is at the southern end of the Grand Teton National Park area.  Jackson Hole ski resort is 12 miles northwest of the town, in Teton Village.  Colter Bay Campground is on Jackson Lake, about 40 miles north of the town of Jackson.  Hotels in the general area tend to be very expensive.  There are several options for camping.  We were told that Jenny Lake is the most sought after and tends to fill up early in the morning, so that was not an option for us.  There is also camping at Gros Ventre, but I read that is somewhat out of the way.  The important information I want to convey is pay attention to where you choose your lodging, because the area is fairly expansive and you could end up an hour away from where you want to spend most of your time.

We arrived at Colter Bay a little after 5 pm and got site D88 from many available sites.  It costs $21/night and is spacious but privacy is not great and the designated tent area is a gravel-covered rectangle.  There is a general store that is very well-stocked with food (including a deli counter) and supplies as well as guidebooks and camping gear, cabins available for rent and a gas station.  Potable water and flush toilets are scattered throughout.  Here they are stricter with bear warnings, advising against even bringing water bottles into your tent at night if such bottles ever had anything scented inside.  But you can still keep food in the car or a bear locker.

The bay was bone dry but Jackson Lake was not, and the backdrop of the glaciated Tetons is jaw-dropping.  There is no view from the camp sites themselves, which are set back in the woods.  We saw a couple large deer in the parking lot. 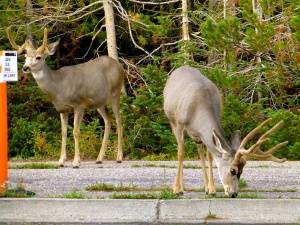 September 8, 2013 (Sunday) – This morning I began reading Investment Biker, written 20+ years ago by Jim Rogers, the famous investor and former partner of George Soros.  He is impressively prescient and raves about Samarkand (Uzbekistan), which Bob had just said is outstanding.  This combo sparked our focus on visiting Central Asia on the first international leg of our trip.

We headed to the town of Jackson with spectacular views of the Tetons along the way.  At one point there were countless bison on each side of the road, and we stopped (the first of a few) to savor the scenery at Oxbow Bend.

Bison and the Tetons

We parked before 10:30 am and walked around town.  The fall arts festival is ongoing and today is the Taste of the Tetons on the antler-adorned town square.  Jackson is a great mountain town with abundant galleries, shops, bars and restaurants.  While no match for Jackson Hole, the Snow King ski mountain is right in town and offers fairly impressive pitch.  There is a Mangelsen photo gallery (I had perused the one in Park City on many occasions but believe he lives in Jackson) with some incredible nature shots.  The line at The Bunnery told us it is a favorite for brunch.

Taste of the Tetons had perhaps 20 local establishments offering food for $2-4, and there was live music on the square.  Between eating and the hour it was acceptable to make Jenni watch football the rest of the day, we walked around some more.  She purchased Eagle Creek packing cubes at the small but effective Skinny Skis shop.  We also passed a structure surrounded by a fence of alternating wood and actual skinny skies.  They had the Dynastar Verticals and of course the classic Rossignol 4S Kevlar in teal green! 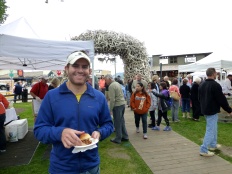 Taste of the Tetons at Jackson town square

The Giants had their season opener at night vs. the Cowboys, but there were hours to kill before then.  We made the mistake of picking the Town Square Tavern for earlier games.  The beer selection was weak and our waitress far worse.

Desiring to see the ski resort in daylight anyway, we broke early for Teton Village.  While not nearly as developed as many ski base areas, there are several lodging properties, shops, restaurants and bars at Teton Village.  It was surprisingly difficult to find a place that would show the Giants game with sound.  I figured the Mangy Moose, an après-ski staple, would be our best bet.  But they had no sound, so after much debate we settled at The Spur.

We sat at the bar and thoroughly enjoyed our conversation with Ted, an excellent bartender/waiter who grew up in Manhattan then went to school in Boulder before moving to Jackson for the skiing.  Another group of young fellows sidled up to the bar and I sat next to Grant, who had also gone to school in Boulder and lived in Vail before moving to Jackson for the snowboarding.  I was really struck by the passion these gentlemen had for the area and the mountain terrain.  Ted went so far as to proclaim that skiing at Jackson is a different sport from anywhere else.  I have often said this when comparing east coast vs. west coast skiing, but saying that Jackson is in a completely different league from the best of Colorado and Utah etc.?!  Here were two guys who lived years in Colorado and were still awe-struck by the mighty Jackson Hole.  That says a lot, and I am drawn to places where inhabitants display such passion.

OK, here the truth comes out.  I have delayed my blog posts so long to avoid having to address the Giants’ season.  The opener against the Cowboys was a harbinger of bad things to come.  Despite many opportunities to win the game, the Giants secured an embarrassing loss rife with turnovers.  My pain was comforted by the 307 Fries, which are the rich man’s version of chili cheese fries.  This is a dish of pommes frites, braised elk and buffalo gravy smothered with Lark Meadow Farm cheddar cheese.  I overheard the locals next to me talk of adding bacon on top, and I wanted to seem cool so abandoned my kosher principles and added some swine.  Brilliant.  If you were wondering, 307 is the local area code.

I love ski towns like Jackson.  They offer fresh mountain air, natural splendor, outdoor activities, good food and beer, liberal attitudes and a unique balance of cowboy gruffness and cosmopolitan sophistication.  They also tend to attract adventurous spirits and travelers.  In addition to Ted and Grant, we met another guy working at The Spur who spends four months each year in Thailand bouldering the limestone karsts between Phuket and Krabi.  He said he enjoys bouldering in the ocean because he can fall up to 50 feet with less devastating consequences!  He also dives the Andaman Sea and Ko Tau in the Gulf of Thailand.  I have always admired, perhaps even idolized, those who live life this way.  It made me really happy that Jenni and I could now tell a story of our own lives that made these people say “wow, that’s so cool!”

The drive back to Colter Bay on the Moose/Wilson road was rough.  Jenni was forced behind the wheel by my indulgences and encountered uneven dirt roads in the eery rain and fog with no lights anywhere except Sven’s headlamps.