Before I forget, there are a lot of deer in the US.  Everywhere.  Tons of deer.  Also, at frequent intervals on I-90 there are railroad crossing type gates that allow the authorities to close the highway.  Presumably for bad weather, but I do not recall ever seeing this in the Northeast and found it interesting.  And I have been meaning to write that for camping, if I had more space it would be nice to bring a citronella candle and a pop-up shelter.  And I need to fill space because there is not much to say about the Corn Palace or Minnesota as seen from the highway.

September 12, 2013 (Thursday) – We exited the Badlands by completing the Highway 240 Badlands Loop Road, which is not actually a loop unless you complete it on I-90.  There is a helicopter tour place by the park’s northeast entrance.  Today was our longest drive of the trip at 700+ miles as we crossed most of South Dakota, all of Minnesota and some of Wisconsin to end up in Madison.

We passed 1880 Town which has old buildings and I think is often used for film sets.  My notes are spotty again but I think I want to say some of the drive is pretty with hills and trees near the Missouri River.  We noticed a lot of horses hanging out by billboards, seemingly even where shade was not provided.  Less appealing to me were the multitude of Jesus signs and anti-abortion billboards.  This is not the forum for religious debate and I am no theological scholar, but the believer in me wants to think that Jesus would rather you spend your money helping those in need instead of paying rent to Clear Channel.

Passing a sign for the town of Winner, I envisioned Charlie Sheen there holed up with hookers and blow.  Which sounds more fun than the Corn Palace in Mitchell, South Dakota.  Nonetheless, it is a famous roadside attraction and parts of it were neat.

The original corn palace was built in 1892 to showcase the rich soil of South Dakota and encourage people to settle in the area, after Lewis & Clark had proclaimed that one could not make a living farming here.  I thought it would be a palace constructed entirely of corn, but it is actually a steel and brick building adorned with murals and decorations of corn.

Admission is free and there are educational exhibits and the most corn-decorated gymnasium I have seen.

Local high schools and Dakota Wesleyan University play games here.  Some proms are held here.  This calls for jokes but it is a PG-13 blog.  They sell corn palace wine and flavored popcorn balls.  Really, this place is a shrine to corn and its primary objective seems to be promoting corn and ethanol.

Shortly after crossing into Minnesota we stopped in Luverne for lunch at the Tasty Drive In.

I enjoyed my thin patty, greasy diner-style double cheeseburger and the fries we split.  Dessert options include endless types and combos of soft-serve with mix-ins.  I do not recall my pick.

DISCLAIMER: I have little doubt that Minnesota is a fine state and have heard good things about Minneapolis (not in the winter), the Boundary Waters, etc.  There is a vibrant distressed investing community and I have friends who live in Minnesota.  So I mean no disrespect and am only commenting on what I could see from the highway.  I guess residents of New Jersey can empathize with Minnesota. 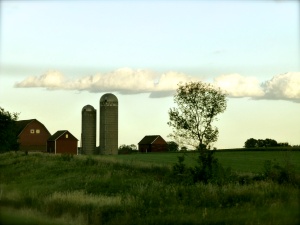 Visible from the highway, there is nothing but corn and windmills.  I did stop at a gas station and see Tweaker energy drink on offer.  And the highlight of our cross-state expedition had to be the town names.  These include Blue Earth, Harmony and Welcome, in addition to Austin and Houston.  The scenery becomes pretty and hilly right before crossing the Mighty Mississippi into Wisconsin.