Well, we made it through our first year of marriage even with a month and half of non-stop togetherness on the back end. Hooray! We still love each other! 😉

The day started with a walk down to the Carriage House for brunch. There was a long wait, but when I told the hostess it was our first anniversary she hooked us up in just a few minutes with the coveted couch seat. We of course ordered two brie stuffed French toasts which were fantastic and overly indulgent. I tried to order a champagne and strawberry rhubarb sorbet cocktail and was disappointed to be reminded that liquor cannot be served before noon on Sundays in New York. We contemplated extending our brunch as long as possible so that we could close with a celebratory toast, but ultimately hit the road for a walking tour of campus in which I recounted to Alan every memory that the scenery evoked. Thank you to Alan for indulging my tour of memory lane. The clock tower played Coldplay’s “Clocks” at noon as we walked through Ho Plaza. In addition, we covered west campus, north campus, the Arts Quad, the Ag quad, the Human Ecology area… lots of walking. It’s a large campus. We stopped by the Dairy Barn, which has been remodeled since I left, though it’s closed on weekends. As I recall, the ice cream they sell there is too high in fat content to be marketed as ice cream, though this may have been legend. 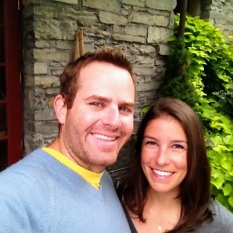 We picked up the car (being sure to tip the valet girl well as I remember Emily doing that back in the day!), and drove down to the Commons. Sadly, the pedestrian street was under renovation and covered up so the hippie community that usually gathers was less entertaining than usual. We noticed that Michael Franti was playing that night at the State Theater and Alan actually saw him wandering around the Commons barefoot. We considered attending but decided to keep our reservation at Taverna Banfi – the restaurant at the Statler. 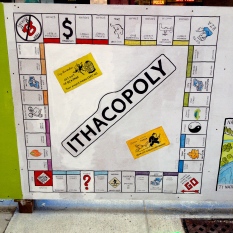 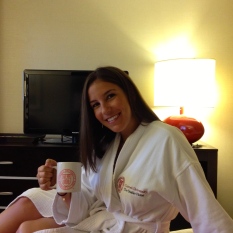 ::enjoying the cornell gear at the statler::

Before dinner we shared a split of prosecco at the bar lounge, then at dinner our waiter asked if we were celebrating something special. When we told him it was our first anniversary he came back with two glasses of champagne on the house. Feeling very loved and happy here in Ithaca! We had an amazing meal – splitting the meat and cheese plate, a seared feta and grapefruit salad, and then the duck with parsnip puree and maple and a cavatelli Bolognese. We also ordered a bottle of the Foxen ’09 Pinot which was divine. Man, we love our California ’09 pinots. For dessert we ordered a chocolate tarte concoction to go, which we brought up to our room along with our glasses of wine and devoured them in bed while watching some of the Emmy’s.  Solid way to toast to year one and look forward to the next one, which is sure to be a memorable one for us.

P.S. I almost made it through two blog posts about Ithaca without saying “Ithaca is Gorges” or some related pun. So I had to throw it in here. Sadly, we didn’t fit in any hikes around the gorges as it rained on us almost the entire time we were there (insert Shithaca reference here). Oh well – next time!

P.P.S. I googled the “paper” anniversary thing. It would have been the perfect year to exchange only cards as we were on the road, but we didn’t even do cards! Our gift to each other was this experience, and we are so glad we’re doing it.