After we fought Friday traffic out of the city, we arrived in Long Island to celebrate Phil and Eileen’s nuptials. The rehearsal dinner Friday night was at a nearby restaurant where food and alcohol were provided in abundant supply. The toasts were my favorite part, especially father of the groom, who gave his toast in Russian while Phil translated.

The next morning Alan and I drove out to Great Neck to visit his paternal grandmother, Elsie, and his uncle Mickey and Sharon and their son Jonathan. I was obsessed with the collection of mid-century modern furniture in Elsie’s house. we had a great conversation over some tasty bagels, and we also enjoyed the family photos she had on display.

::my handsome father in law::

Back at the hotel we quickly got ready and hopped onto the shuttle to the wedding. This was my first Russian wedding, and boy was it Russian. Rumor has it they chose this location because it was the only county within driving distance from Boston that lets you put a bottle of vodka out on each table. And a bottle of vodka there was, in addition to cognac, wine and a full bar, not to mention the vodka martini bar that literally dropped from the ceiling amid dry ice during the cocktail hour, and the most impressive spread of edible offerings I have every seen at a wedding. My favorite part was that every time someone says “Gorka! Gorka!” the bride and groom have to kiss (and I think everyone is supposed to take a vodka shot). Given the ample supply of vodka its no surprise the party lasted past 5am. 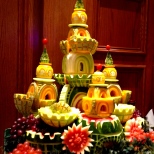 ::just a glimpse of the food situation::

The ride out of Long Island the next day was the worst. I’m not naming names, but someone whose name rhymes with Schmalan may or may not have booted in the car, and I may or may not have had to stick my head out of the window to avoid vomiting myself on account of the smell.

P.S. Anyone know why there are no tolls on the west coast, but they’re all over the east? Also, when did they get so expensive?! The Illinois toll was $7.90 and then Ohio was $9.75… and then the Verrazano Bridge toll was $15! (I was happy to see tolls of 70 cents upon entering Virginia).