This is a magical place in southeast New Mexico where gypsum dunes backed by southwestern-looking mountains give an otherworldly feel.

After Carlsbad and Guadalupe earlier in the day we skirted El Paso and then drove north on highway 54 with good mountain views.  There are various military installations around here, including the White Sands Missile Testing Area which forces the closure of the Monument and roads periodically, so be sure to investigate. 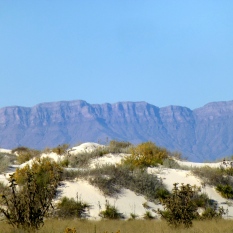 I was shocked when we had to pass through a border patrol road block.  I never realized I could be stopped and my car searched when I was not trying to cross the border.  We encountered this again on the 10 Freeway driving back to Los Angeles.  Each time, the officers looked at us, asked if we are US citizens and then said go ahead.  I have often lamented my pale skin because I cannot blend in as much while traveling.  Some have that “Mediterranean” look where they might be from South America or Europe or the Middle East…not me.  But at these border patrol stops I was mighty happy to be pale whitey. 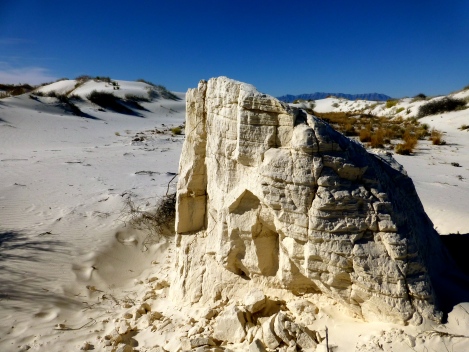 Visitors to White Sands usually stay in Las Cruces or Alamogordo, we chose the latter which is closer to the Monument.  It is packed with chains.  Our Days Inn was another hotel lacking internal hallways, and had some pretty shady characters with bloodshot eyes hanging about.  Nobody showed any disrespect, and I admired Jenni for being willing to stay places like this with no complaints.

Thursday was another cool, crystal clear day.  Shortly after leaving the hotel we passed a sign warning not to pick up hitchhikers because there are detention facilities in the area.  Jenni wanted to try anyway but I held firm.  We stopped in at the visitor center for information and a great orientation video.

These are the largest gypsum dunes in the world.  Some of the nearby mountains are rich in gypsum and the rain and snow melt dissolves it into water that flows into this basin which creates a lake.  The water then evaporates leaving behind big, soft crystals which the wind scatters and breaks down until it is fine, powdery gypsum.

In the desert there is much fascinating flora and fauna, often not visible to the casual observer.  For instance, the video told us that after rains brine shrimp can emerge and lay eggs which might lie dormant as long as 100 years before hatching with new water.

Jenni was thrilled at the opportunity to sled on the dunes so we bought a sled at the gift shop and a little wax.  Even though it was 45 degrees out we just had to drop Sven’s top.  It feels like a winter wonderland, with the paved road turning to sand necessitating plows.  It took great restraint not to pull an EB in the wide-open parking lots. 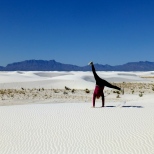 We walked in a bit on the Alkali Flats Trail for some sledding and ski-jump practice.  Jenni was giddy.  Then over at the backcountry camping parking area we walked up on the dunes and Jenni found a million dollar bill plastered with Jesus praise.  Odd, we thought.  Then we saw an older man with a camel, a pair of dogs and some film makers.

It turns out he spreads the million dollar bills all around and they were making some kind of documentary.  I find it a little strange to both proselytize and litter in a national monument, but what do I know.

If you get the chance, I recommend spending at least a couple hours in this unique and stunning environment. 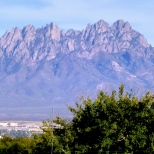 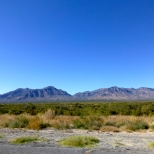 The Days Inn at Alamogordo was fine but a little dodgy.  There are nicer hotels up the road.  If you are coming from the west, you would probably want to stay at Las Cruces.

The sled at the visitor center cost $17 and then you can return it for $5 back.  The refund is priced brilliantly, just like wedding rentals.  Ranger-led walks take place around sunset but we were long gone before then.

Entrance to the dunes is $3/person and our National Parks pass worked.  Of course you should bring water, sunglasses and perhaps a compass if you want to get too far off the road.