It hit me here, how fortunate we are to have this experience. I turned to Alan at one point and said, “babe, we’re unemployed. And we’re on a houseboat. In India.” What an experience. 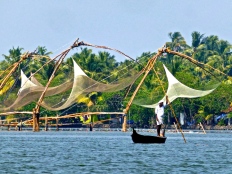 We chose the more off-the-beaten-path option for a backwater houseboat. The more popular choice is to go down to the port in Alleppey and choose from one of the 1500 houseboats with electricity, air conditioning, motor power, and second floor sun decks. Instead, we took a boat from a more remote village, where there are only three houseboats, no electricity (although there is solar power so you can turn on lights and a fan at night), no air conditioning and the boats are powered only by two men who punt. Standing at the front and back, each with long bamboo poles, they propel the boat along the shallow waters by staking the poles in the ground and pushing. Talk about zen. Pure relaxation. I kept thinking to myself, “we have got to be in the most serene and peaceful place in the whole of India.”

::easier to pull on this part::

While our guys at the front and rear punted away, and Manu cooked up some phenomenal eats, Alan and I read. And read and read and read. I read an entire book the first day, and the better part of another the second, until I ran out of reading material. And we relaxed. I haven’t felt this relaxed in I can’t remember how long. (P.S. – The Wonder Spot by Melissa Bank, awesome. Thank You For Your Service by David Finkel, devastating and powerful read.)

We docked for a quick excursion to a little fishing bay where we saw a boat coming in and Alan stepped in to help the guys push the boat up onto the sand. We watched for a while as they pulled their impressive catches from the nets. A lot of work for some small fish, but there sure were lots of them.

After lunch, anchored in the middle of a large brackish pond, we are surrounded by palm trees on all sides, and the only sounds we hear are the myriad of birds and the gentle ticking of the palm leaves in the wind. I loved watching for kingfishers – such beautiful birds.

The rides back towards the dock as evening nears are still relaxed, though just as relaxed as they can be when every so often you pass a child on the side that says, “Hello, what’s your name? Give me one pen, please.” We sadly had no pens, but still had some fascinating conversations with these kids. Some wanted to chat more, and one particular boy, who aspired to be a sound engineer or a movie star, wanted to know if we liked Justin Bieber, had we ever seen him? (The kid’s got beliebers all the way out here.) The same boy wanted to know if our marriage was arranged or by love. Alan misheard and told him it was “by law.” Haha, my husband the romantic 😉 By the way, people in Kerala speak Malalayam, not Hindi, though many know Malalayam, Hindi and English, including all three of their varying alphabets. I hadn’t realized how many languages are spoken in India! 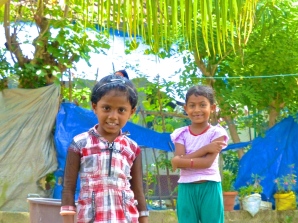 We tried out the little canoe, which was lovely until a creepy jungle spider came in and ruined my zen. Ugh, confined spaces, arachnophobia. It was bad. I had to switch sides with Alan so he could whack it with an oar, and the people onshore thought there was a snake in the boat given my reaction. 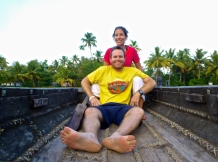 Overnight we stayed docked at the village, and lest we forgot we were in India, she gave us a little sensorial stimulation. Out of nowhere there was music coming from several different places, and then fireworks, apparently.  We enjoyed our bottle of Indian wine (France need not start worrying about the competition), and ate our dinner while watching the sunset. Sigh. 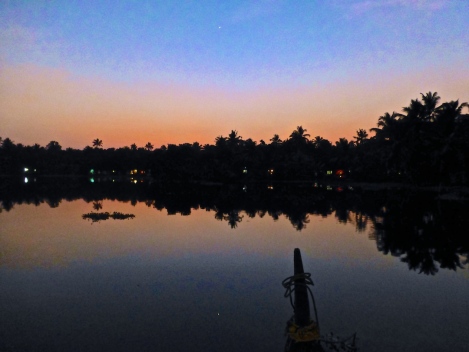 Having run out of reading material on day two, I entertained myself that night while Alan read by playing cards (I remembered that I packed a deck of mini playing cards that I bought at a gas station in Minnesota! good call me) and then retiring to watch the geckos/lizards eat the flies off the walls and ceiling of the boat. Surprisingly entertaining, I have to say. 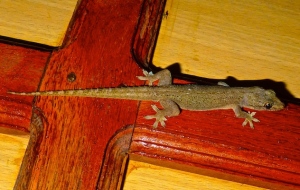 We’d signed up for only one night on the boat, the second night to be spent in the farmhouse, and had planned on exploring the little village by auto rickshaw or scooter. Instead, we opted for a second night on the boat, choosing to soak up this relaxing experience as much as we could. We definitely got the “B” team on day two. Poor guy, I don’t know if our head punter was sick or tired or what, but he dropped his bamboo pole in the water, dropped the rope when he was leading the boat from the banks, and ran the boat into the wall as we passed under the one bridge. Oopsie. Ask to be on Manu’s boat if you check this place out (Stanley Wilson’s eco-friendly tours (we obviously recommend you do!)), his English is fantastic, his cooking even better.

One thought on “The Backwaters: Kerala, India”