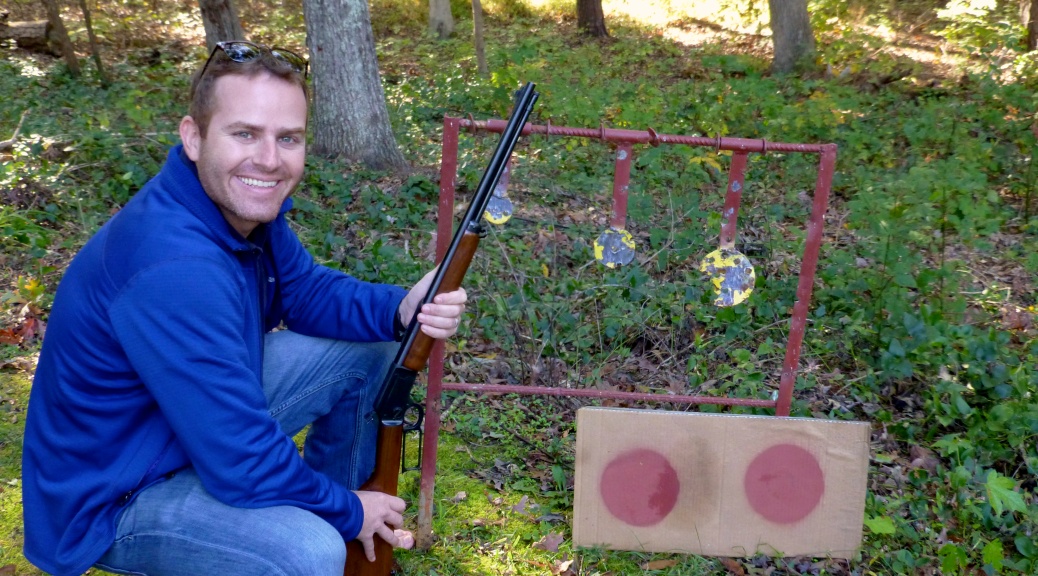 We spent a couple amazing days visiting Jenni’s family in Southern Virginia, where her mom grew up.  Except for Susan, this was my first time meeting everyone.  Jenni’s grandmother, Margaret Scheier, passed away last week.  May she rest in peace.  It is a blessing that we were able to spend time with her. 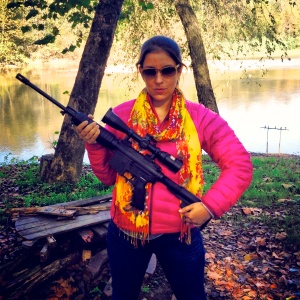 I knew on the drive down from D.C. that I was entering less familiar territory when some road tolls in Virginia required me to throw quarters into that plastic basket, and also when I spotted the first Confederate flag of the trip.  South Boston, VA was our destination.  It is near the border with North Carolina and the economy centers on manufacturing, which has not been easy for some time in America.  A short drive down the road is Dan River, which once was home to a textile company that sadly was the debtor in the first major bankruptcy assignment of my career.

Susan and Darrell kindly hosted us and the first night they had over nearly all Jenni’s aunts and uncles who live nearby, except James and June who were out of town.  Southern fare was in full effect, including bean stew with venison, fried chicken and fried livers, baked ham, biscuits, cornbread and jalapeno poppers wrapped in bacon.  Billy brought the chicken and livers, and for his cooking prowess he is known as Billy Crocker.  Lynn informed us that grandma used to make biscuits with clabber.  Susan taught us a great trick: a mix of peanuts and candy corns makes a good treat.

Mid way through the evening some of the fellas disappeared and called Susan with instructions to gather everyone and come to the front porch.  The guys had driven across the road to the family’s property (where Jenni’s mom and her siblings grew up, though the house is now gone) and surprised us with a fireworks show!  After Devin’s in Maine, this was the second fireworks show in a few months courtesy of Jenni’s peeps.

I learned some new lingo like “fix” for cook, “reckon” for believe and “right xxx” which is hard to explain.  Molly and Hogan, Susan and Darrell’s Norwegian elk hounds, roll over when asked if they’d rather be Democrats or die.  We heard the story of how Jenni’s grandma Margaret loved the NC State Fair and each year she would get lost driving there.  She always said, “it’s OK, we’ll just the follow car in front of us because I’m sure they’re going there, too.”  As luck would have it, we were in the area during the 10 days this fair is open for the year and vowed to go.  Which you will read about it in my North Carolina post. 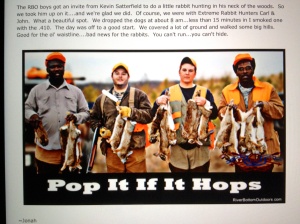 One of Darrell’s two sons joined with his family and there was robust discussion of hunting, fishing and noodling.  In case you don’t know, “noodling” is yanking enormous catfish out from the muddy banks of rivers with one’s hands.  These creatures are often 40-50 pounds and have been recorded well over 100 pounds!  Gloves are worn often these days to minimize flathead rash, which is the painful looking injury inflicted by catfish bites.  Even gloves will not save digits if one is unlucky enough to find a snapping turtle hole instead of catfish.

There are different hunting seasons for different animals and implements.  My memory is a tad foggy by now, so please excuse any inaccuracies or omissions.  They hunt deer and wild turkey, along with various other animals.  Bow and arrow, muzzle loader, rifle or shotgun may be used for different targets and at different times.  A heavy contraption may be used to ascend and set up a platform in the trees.  Darrell’s boys have an impressive website dedicated to the outdoorsman lifestyle.  Check it out here. 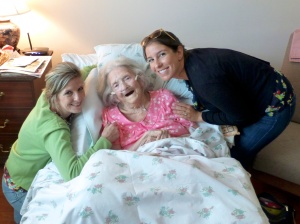 On Wednesday we went into the historic old town area and saw Susan’s friend.  The day before Jenni and I had stopped at Caffe Peroni which has a surprisingly eclectic beer selection.  A couple doors down is Bistro 1888, which is supposed to be good.  I saw a little structure selling 20 pound bags of ice 24 hours/day for $2, the first of many in the South.  Later we visited Margaret at the nursing home in Clarksville.  She was beyond thrilled to see Jenni and gave us ear to ear grins when she voiced her approval of Jenni’s good choice in marrying me.  Susan was wonderfully kind and loving to Margaret and is like the mayor there.  Afterwards, we passed a widemouth bass mailbox and crossed Buggs Island Lake before heading to Jenni’s grandpa George’s and Lucy’s home. 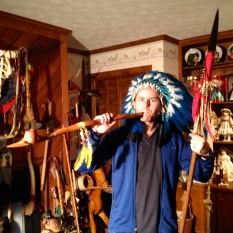 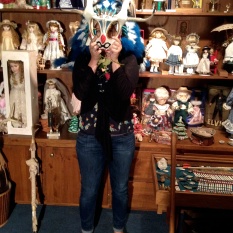 This is quite a special place.  George is a gifted carpenter and built much of the furniture in the home, including a bench that in a style I can only describe as pointillist writing since I don’t know the carpentry equivalent says “Caglayan” on top and “Open Sesame” on the side, which was the name of one of Alper’s companies.  George shared old photos of Jenni’s immediate family (by the way, when Devin visited at a much younger age he wore bright clothes to hunt and thus earned the name Rainbow, not Rambo) and told us his ancestors were brewers in Hungary. 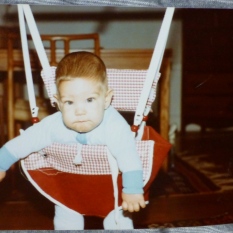 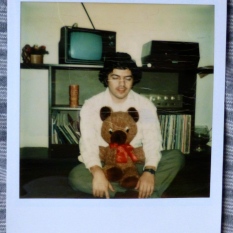 He has a garage workshop where he used to make bullets, including shaping the metal and loading the powder.  He was an award winning archer.  There is a side house with an astounding collection of Native American pieces, dolls, spears, pelts of coyote, wolverine, and raccoon, and much more.

Then we got to the guns.  Tons of guns, as Guru would say.  Again my memory is foggy and I will not do this justice, but his collection includes several handguns, a Winchester 1873, the Colt equivalent of the Bushmaster AR-15, a Tommy Gun complete with violin case and all, and more.  I shot the plain old .22 rifle.  And I did the family proud.  After a couple rookie rounds, I hit my stride and from about 20-25 yards showed the paper plate who was boss!  Jenni let off a couple rounds, too. 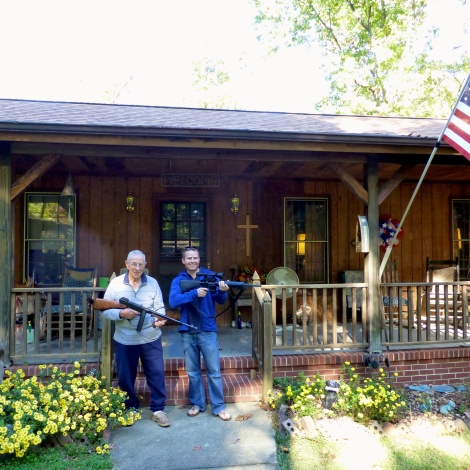 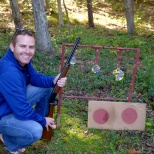 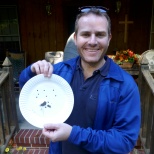 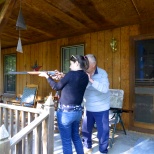 Juices now flowing, Susan took us over to Danville to James and June’s home.  James is quite the artist.  He showed us many paintings and flawless woodwork he has crafted.  The man is passionate about wood.  (Yet again, that’s what she said.)  He sent us off with a handmade Brazilian cherry cutting board.  That night, Darrell grilled some ribeye steaks, Susan made baked potatoes and garlic bread, and we watched the Red Sox win their first of four World Series games.

Before continuing south on Thursday, we got a bit more QT with Darrell and the hunting tools.  I was slightly embarrassed when I could not draw his compound bow.  It is the wrong length for me, but more strength might have done the trick.  Darrell could not have been kinder, assuring me that it’s all about what muscles you use regularly and that even he struggles at the start of the season.  I reckon the latter was a pity nod.  Whether he struggles at the start of the season or not, he was masterful before our eyes.  He put two arrows in a blue dot the size of a plum from 40 yards out. 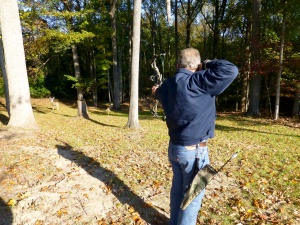 We drove to some property that Billy leases by the river and broke out the big guns, literally.  Darrell’s collection rivals that of grandpa George, and he generously let me empty a bunch of rounds.  Ammo is not cheap for guns like these.  I shot a Sig Sauer 9mm with a 15 round clip and The Judge, an epic piece that can shoot .410 shotgun shells or .45 long colt bullets.  The AR-15 was probably my favorite, and I was pleased to hit a log sticking out of the river perhaps 90 yards away.  I was also pleased when my hearing returned to normal a day or two later. 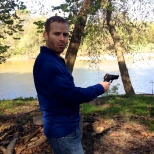 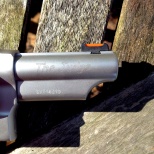 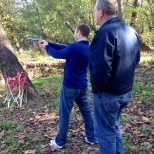 Here are some other things I learned in Virginia…two new superstitions: (1) touch the windshield and make a wish when driving through a yellow light; and (2) it is bad luck to exit a dwelling from a different door than that which you entered.  Jenni’s family does not mind eating with hands nor off each other’s plates, just like my family.  There are a lot of towns around here that end with “ville.”  Hard work and being down to earth command great respect, and success is not begrudged.  The Midtown Market in Danville is said to be enjoyable.  Chains include Cookout drive through with lots of milk shakes, Bojangles and Sheetz Gas.  We saw gas as low as $2.89/gallon.  Spending time with Jenni’s family was a highlight of the trip for me, and I look forward to some hunting, fishing and Billy Crocker’s frog legs and pork shoulder on my next visit. 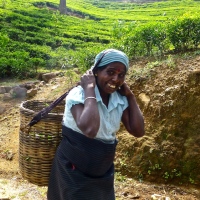